A protester reacts as the U.S. Consulate in Benghazi is seen in flames 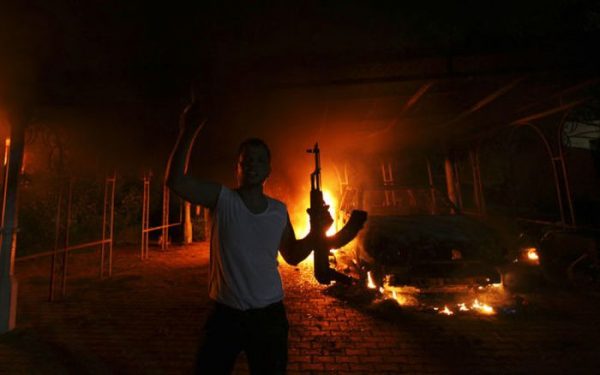 A protester reacts as the U.S. Consulate in Benghazi is seen in flames during a protest by an armed group said to have been protesting a film being produced in the United States September 11, 2012. An American staff member of the U.S. consulate in the eastern Libyan city of Benghazi has died following fierce clashes at the compound, Libyan security sources said on Wednesday. Armed gunmen attacked the compound on Tuesday evening, clashing with Libyan security forces before the latter withdrew as they came under heavy fire. REUTERS/Esam Al-Fetori (LIBYA – Tags: POLITICS CIVIL UNREST TPX IMAGES OF THE DAY)